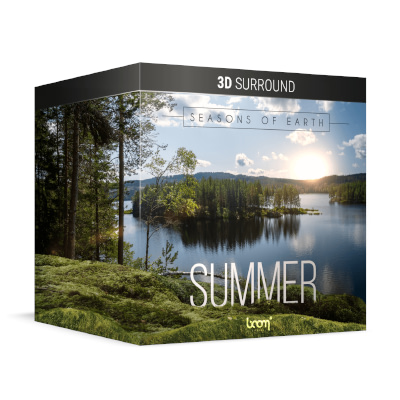 With SEASONS OF EARTH – SUMMER, we’re one step closer to completing the entire annual cycle of Mother Nature. Nature recordist Matthew Mikkelson continues his epic sonic jaunt through the seasons with this library of summer sounds. He’s scoped out the perfect places across North America, from Arizona and Colorado to Kansas and Montana, to make pristine recordings of the beautiful natural environments that enrichen the world.

We sat down with Matthew to discuss the process of recording SEASONS OF EARTH – SUMMER along with some of his thoughts on sound design and climate change.

“Summer for me is when the bird activity really calms down and the insect activity really picks up,” Matthew describes the sounds of the library. “You get a lot more larger flying insects like bees and flies and more wind too. The wind picks up – at least in a lot of these places in the United States and North America – the afternoon summer wind really picks up once everything heats up.”

In SEASONS OF EARTH – SPRING library, we found that the birds come to life more than anything in the early season of the year. With summer, the amphibians and insects take over, with frog choruses and insect symphonies taking the front stage at nature’s festival of sound.

“It’s not always the most lively in summer,” Matthew says. “Most of the time, it’s just the wind that you’re hearing and occasional insects. But that allows you to do these really big landscapes where you can hear the wind blowing through a distant tree, even if it’s half a mile away even. It allows you to really focus in on that sound source and not have a whole lot of other distracting stuff.”

Matthew did a lot of experiments with the sonic offerings of wind, contributing greatly to the library’s atmospheric qualities. “It’s amazing how wind plays plant life like an instrument,” Matthew says. “Every plant sounds different as wind blows over it.”

Matthew traveled across North America finding the perfect locations for summertime shooting. He’s studied flight patterns and tourist routes searching for places that are absent too much human interference. At every turn though, he’s in a constant battle against human-made noise pollution. “Noise pollution is everywhere and I’ve got to cut out planes and find those chunks of time that you don’t have the noise pollution and that still give you the sonic diversity that you’re after.”

When he’s found a good place in his travels, he marks it and works outward from there. “There are a lot of places I’ve [previously] identified where there’s not a lot of air traffic, so I try and go back to those places. If there’s one piece of land [I know about], I circle it pretty quick and try to branch out and find different ecosystems within these lighter flight areas.”

In this library, he ranged across the plains and Rocky Mountain states, also spending a lot of time in Arizona. “Colorado was a good spot for summer, as well as Kansas. In Arizona… I was able to focus on a bunch of different cacti. As the wind blows through each species of cactus, it sounds totally different. You can hear the needles rubbing up against each other, but sometimes they just give these really nice larger textures to the wind.

“There’s this sound design trope of using a power line wind in a nature or mountaintop scene. I hope this library will encourage people to find natural textures for wind instead of using things like that in natural settings.”

Over the years, Matthew has himself noticed the changing climate and how it’s made an impact on his recording, notably on a library dedicated to the summer. “What I’ve noticed, especially in the past two years in the United States, is that we’ve had a big drought and I’m not getting as much frogs and insect choruses as I did before,” Matthew says. “It’s much harder to find that stuff. Insects seem to have gotten mellower.”

“I think one of the changes is the desertification of a lot of these environments and plants are dying since we’re not getting as much moisture. That totally affects the soundscape of these locations. That was especially prominent in the deserts, obviously, but also in places like Tennessee and Kentucky where you usually get these really nice summer rainstorms with thunder and all these things.

“I didn’t get any of that stuff,” Matthew continued, opining on the changing climate.

“I spent three weeks in Colorado one year, 2 weeks the next year. I didn’t get that summer thunder that is usually so accounted for in that time. It just kind of goes to show that our climates are unpredictable and the things we used to be able to count on are not necessarily there all the time anymore.”

Scoping out the landscape is among the most challenging aspects of nature recording. “I sometimes find that what you’re hearing through the microphones often isn’t visually representative of what’s happening in the space, so you’ve got to use your eyes and what you know about how sound travels to line up a stereo pair.

“With the Schoeps ORTF3D Surround rig, for some reason, I really use my ears first to tell me what I want to record and then as I look at the sound sources around me, I know how to position it because I know the system super well. I give it a rough alignment and then that’s when I put on the headphones and start trying to balance out each of the pairs and sometimes that means rotating an eighth of an inch or tilting an eighth of an inch one way or another just to balance things out. Or sometimes that means I need to circle around to the other side of this sound source, so that way I can get this sound into the back pairs or away from the back pairs more.”

Matthew goes through great pains trying to get the balance just right, to have the most active sounds in the front channels and using the back channels to build the atmospherics, creating a truly immersive experience. “I think, what can I compositionally do to put sound sources in a way where you don’t have something way off on your right and then something in the center on the front? I’m actively thinking about balance in the mix so that when someone drags and drops these files onto their timeline, they don’t have to do much futzing with them.”

Matthew does the bulk of the editing himself, but for the quality control and any additional help, there’s always one person he turns to: Laura Ginnone of Ebbtide Sound. “She’s a wildly talented field recordist and definitely the best ambiance editor that exists for work like this, where critical listening and attention to detail is super paramount… She hears like a hawk.” Laura did a quality control pass on everything Matthew did for this library.

Laura did all the indexing and tagging as well, before finally passing it on to BOOM Library to become an official entry into the SEASONS OF EARTH collection.

“What I love about BOOM,” Matthew tells us, “Is you’re essentially giving people access to that [movie theatre] quality of sound collection at a really amazing price. Sure, you pay for these libraries, but what you get for them I really think is so worth it. I’ve never had anyone come to me and say they regretted buying these libraries. They’re just so multipurpose, they fit in so many different types of designs.

“And that’s on purpose, that’s not by accident. We spend a lot of time making sure that when you buy this or that $350.00 library, it is going to be exactly what you need and you’re going to be able to use it for years and years to come. 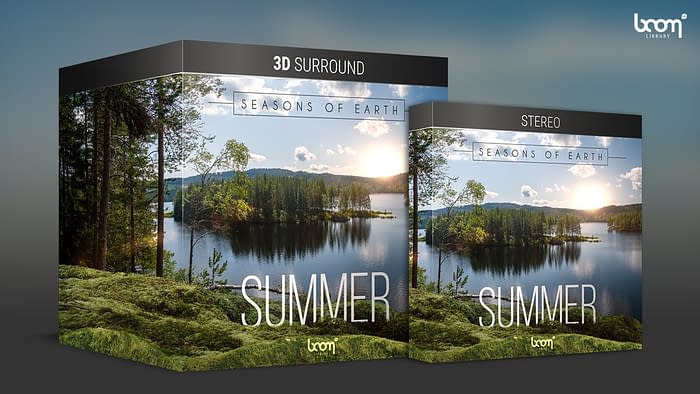 SEASONS OF EARTH – SUMMER transports the listener into these ambient soundscapes of a North American summer, complete with gentle afternoon breezes, singing cicadas, and an orchestra of cactus needles.

The library includes 88 ambiences making up 76+ GB (16+ GB for the stereo and 60+ GB for the surround) of total summer-time immersion. 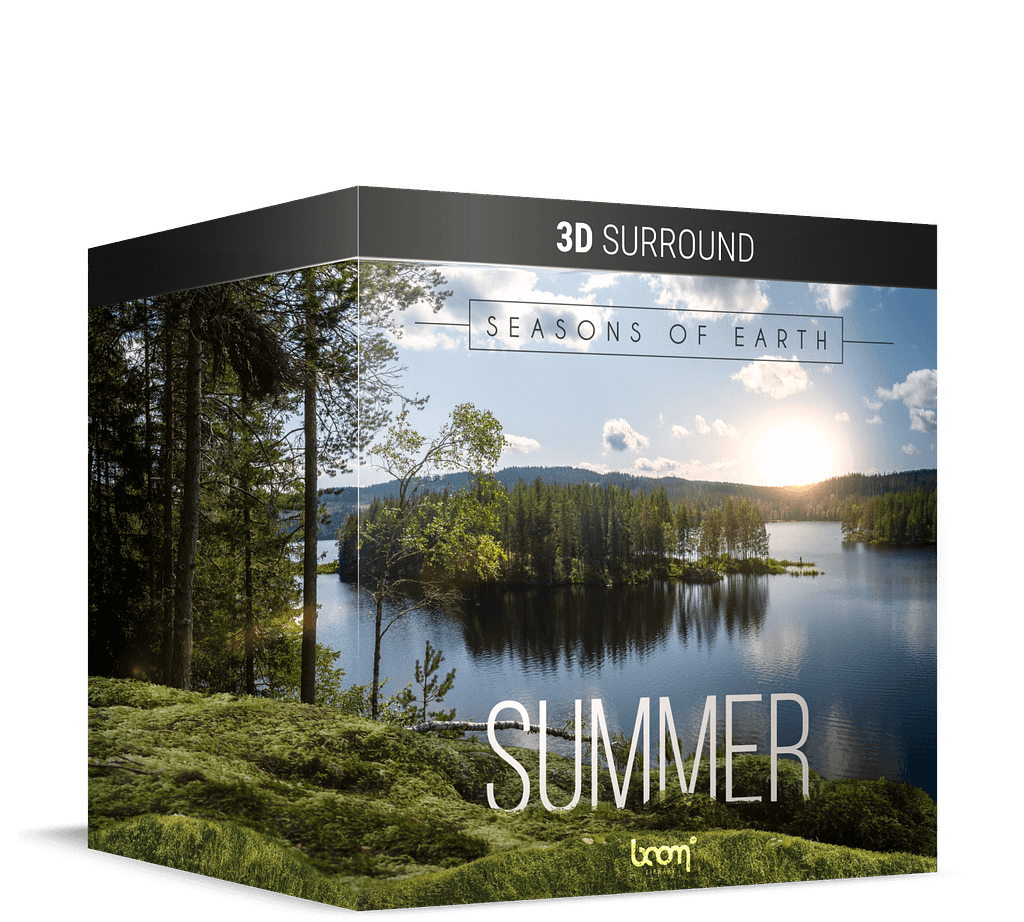