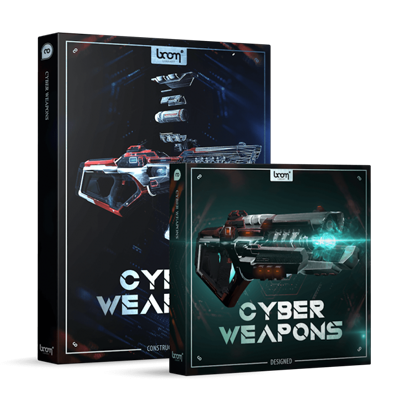 On a quest to create BOOM’s newest and best science fiction FX library, Cyber Weapons, our sound designers went everywhere from gun ranges and scrap yards, to even a train museum. No metal was left unturned, putting together everything you need to design any science fiction weapon you can imagine.

The team was led by Michael Schwendler, who we sat down with to get the inside story of creating this inspiring new collection. Michael doesn’t have the typical sound design background: he studied environmental science until 2003, when he turned his hobby into a profession and became a composer for royalty free music at Dynamedion. A couple of years later, he joined the sound design team under BOOM Library. “I quickly felt a lot more comfortable with my new remit and never looked back to being a composer,” Michael says.

Michael’s history in sound design is tied to BOOM’s own history. He was working with the founder, Axel Rohrbach, on various sound design projects for Dynamedion. It was then that Axel came up with the idea of going further and creating sound design libraries, spinning off the BOOM Library brand and bringing Michael in as part of the team right at inception.

We have spoken with sound designer Michael who will give us even more detailed insights.

What can we expect from the Cyber Weapons library?

The construction kit contains all the ingredients you need to design every sci-fi weapon you could think of. Before we started, we discussed which categories of sounds are needed, we broke down sci-fi weapon sounds into their “elements” so to speak. We came up with charge, shots (obviously), tails, mechanicals, servos, and flybys. As a special category we did beam sounds. We also did a real gun session to be able to create ballistic weapons.

The designed part comes with shots, beams, reloads and flybys. All categories are in 3 different sizes from small to large delivering ready to use sounds for your projects when the deadline is tight, but they also are a great source of inspiration and of course can be used as source material too.

When we were coming up with what to do, we were trying not to make any rules that might limit our imagination. The only goal was to deliver great sounding source material, no matter where it came from. We wanted to deliver a fresh approach to an established genre, bringing in always needed new source material.

What inspired you to create the library?

It was just about time to create our first sci-fi weapons bundle. Our sci-fi bundle already contains some sci-fi gun sounds, but of course with these we just scratched the surface of what’s needed to create a large variety of top-notch sci-fi gun sounds. With this release we filled another gap in our ever-growing portfolio.

How did you record the sounds?

We used a variety of different sources. A lot of the sounds were created with VST Instruments, some of the shots are sample-based, heavily processed with plugins. The “real life” parts (mechanicals and servo) were recorded with a Sennheiser 8000 series M/S and X/Y setup and a Sonosax RX4+ Recorder. The charge sounds and some of the shots and flybys were created with a Eurorack modular synth. For the gun session we did a multi microphone setup in stereo/mono with up to 6 different distances.

We used the Eurorack on certain parts of the construction kit. It’s a very interesting way to create fresh source material and the possibilities are endless. It’s kind of tempting, I might join the Eurorack club sometime soon.

Where did you do the recordings?

Most of the sounds were created/recorded in the studio. Some of the mechanical sounds were recorded on a scrapyard and a train museum. The gun session took place in our very neighborhood at a private shooting range.

We think that the mechanicals are an essential part of a sci-fi weapon. To get source material for big guns we obviously needed to record huge sounding stuff. The scrapyard and the train museum offered a variety of large metal parts that gave us what we were after.

For the gun session we were very happy that we didn’t have to travel far! All our other gun recordings (Guns, Assault Weapons, Historical Firearms, Silencers) took place either in North America or Africa. The rules in Germany concerning guns are very strict, you’re only allowed to shoot at shooting ranges. Most of them are surrounded by walls which makes them unusable for gun recordings. This time I was able to get in contact with a close-by shooting range which is in a forest. An open field surrounded by a forest and some small hills made a great spot with some really nice reflections for the gun tails.

The obvious choice when it comes to microphones for sound design is something which picks up high frequencies above hearing range so the files can handle a lot of down pitching without sounding unnatural. We choose the Sennheiser 8000 series, as they are very reliable, good sounding workhorses.

For the gun session we used a multichannel setup with Sennheiser 8000 M/S and X/Y, Sennheiser Ambeo, Sennheiser MKH 416, DPA 4007 and some additional recordings with a PCM100 handheld, which we placed close to the shooter and really cranked up the input.

What did you enjoy most about making this library?

Doing sci-fi sounds is one of my favorite categories (next to fantasy) as you can get really creative. To be honest the whole library was great fun to work on! And I learned a lot about using Serum.

What can I do with these sounds?

I think this sound pack definitely has a lot more fields of application than just sci-fi. These sounds are great as additional layers for just about anything contemporary. Adding those as a layer can give a nice edge. You can beef up impacts by adding some of the shots, you could add grit to whooshes by adding some sounds of the whoosh category. The source material also works well as additional layers for magic sounds. The mechanical category is great by itself and could also be used to create gun foley or work as an additional layer for those or you could use those sounds for robot movements. The gun category is great to design real guns too.

WHAT OUR CUSTOMERS SAY ABOUT
BOOM LIBRARY SOUND FX

“An excellent, excellent collection. With the Cinematic Metal library, you could almost do any high end trailer with those alone. I’m so happy there’s a company like you guys out there. The need for these type of sounds are monumental. Especially for us at Riot Games, we need more, and more.”

“BOOM Libraries are first and foremost very professional in how they work, planning, equipment and dedication to making sure to capture everything in as high fidelity as possible really sets them in the very top of the spectrum. Also, they are really lovely people to work with!”

“BOOM libraries are an absolute staple in my SFX library arsenal. I owe a lot of my success to the amazing tools BOOM has provided me! The quality of each library is absolutely incredible and  I can always count on each sound to be the highest fidelity possible.”

The next generation sound effects library for futuristic, modern and Sci-Fi weaponry. From small sidearm-grade lasers to planet-melting beams of destruction, this bundle offers the whole range to pick from.

Order the bundle until December 3rd and save 20%. 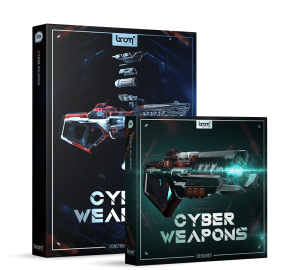