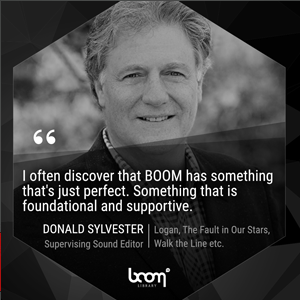 Today, we have a very special news piece for you. Donald Sylvester recently worked as Supervising Sound Editor on the great movie „LOGAN“ and he is now nominated with his work for an MPSE 2018 sound effects Golden Reel Award. Congratulations!

Donald was so kind to tell us a bit more about his work on the movie and – of course – why he chose BOOM Library Sound Effects for his creative work.

Tell us something about yourself: who are you and what was your work on Logan?

I’m the Supervising Sound Editor for Logan. I’ve been a sound editor and supervisor in Hollywood for 32 years. This is the fifth film I’ve been fortunate to do for James Mangold.

From the beginning of principal photography, I’m embedded with the picture editorial department. As the editors are assembling the scenes, I’m adding sound effects and smoothing out the dialogue. At the end of production, James comes back to the cutting room and wants to see a quick cut of the entire film, complete with music and sound. So, a lot of decisions have to be made about dialogue and sound effects at the beginning of the process. Once my sound crew comes on a little down the road, I then focus on ADR. Over a period of weeks, I work with the sound crew to flesh out the soundscape and repair any technical flaws. Then we take the film to the final mixing stage, where we assemble all the sounds and mix it down into the final version under the direction of James Mangold.

What is your personal aesthetic? What’s the claim you put on a Blockbuster project?

The best influence on me over the years is having the pleasure to work closely with a highly acclaimed director who really enjoys and expects good sound in his movies. The sounds that make it into the film must reflect the story and inform the scene or it will be taken out and redone until it does. James loves and demands details in everything – be it a big event or a small moment. For example, when atomic bomb exploded in The Wolverine, in addition to the heat and the wind it generated, James called for windows shattering and people screaming. Even footsteps in the dirt should have a distinctive feel and narrative grit that fits the story and supports the personality of the character. It’s all about story-telling.

What is most important to you when picking sound effects (from SFX libraries) for Hollywood Blockbusters like Logan?

I don’t do anything different for any of my films, even those that some may call ‘blockbusters.’ The truth is, every story deserves to be heard and the scope of the story is only one aspect of it.

The approach of Logan was to bring a so-called super hero film down to Earth – make it real and make it gritty. We wanted to focus on natural, authentic sounds and avoid special effect sounds, including science-fiction and electronic sounds. For example, when we’re in a scene in a futuristic and high-tech laboratory, the sounds we used were sounds common to hospitals or surgeries. The more real, the better. 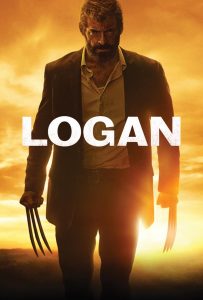 I’ve always appreciated BOOM libraries for their clarity and purpose. Most sound editors take from a variety of sources in order to build unique sounds. You cannot simply pull a sound out of a library and drop it into a film. At least, that’s not how I work. So, when building sounds, I start with a base and build on that. More often than not, I discover that BOOM has something that’s just perfect. Something that is foundational and supportive.

We had a lot of SUV’s in Logan and BOOM’s cars and vans were a solid base to start with. Many scenes took place in high chaparral country, so we pulled liberally from BOOM’s prairies and wind sounds. And when it came to guns and fighting (and there is a lot of that going on in Logan), we constructed sounds from Close Combat, the Cinematic Construction Kits and Medieval Weapons, believe it or not. I can’t really go into details, because that would be telling.

Sometimes the real sound of something is only the beginning. The elements that go into the final sound have to have clarity and definition. That’s why I normally start with BOOM when I’m looking for sounds. I know I’ll find something well-recorded, at a necessary sample rate and that plays well with others.

How did our sound effects support you in your creative sound design?

I try to find sounds that serve as an inspiration. As I’ve said before, I’m going to build the final sound, but I can’t even begin unless the foundation is a good one. Some other sounds in my library are at an old sample rate and I really can’t mess too much with those because they generate unwanted artifacts. So, the higher quality and sample rates of BOOM sounds fit in well with my methods.

Do you remember any remarkable situations in the movie that are especially supported by specific sound effects?

Logan has always had those claws that tend to pop out of his hands. James didn’t want to use the regular “Wolverine Claw Library” that’s been a staple for all the X-Men movies to date. He very specifically said that we were to come up with new claws. The fact that we now had a twelve-year-old mutant who also had dangerous claws compounded our goal. But we did it – we made new claws and they’re the claws heard throughout Logan.

Additionally (while not a single, specific sound), the sound of Charles Xavier’s mental illness was a key plot point in Logan. The scene in the Las Vegas hotel where Logan must fight through the debilitating sonic sensations that Charles emits is a sound-fest for everyone. We tried many versions but it eventually evolved from what was initially score into a complex soundscape designed to inflict as much pain on Logan as possible, without killing the audience at the same time.

Were there special challenges in the movie sound that had to be overcome?

The claws, as I mentioned, were a challenge as well as Charles’ debilitating soundscape. But another big sound goal was character-based. Hugh Jackman plays two characters in Logan – Logan and X24. We decided to re-voice the X24 character so that when Logan and X24 actually fight each other, there’d be two distinct voices in the melee. That meant we had to audition voices and create a realistic performance for X24.

As we all know this problem: How do you enjoy a movie (that you didn’t work on) as a holistic piece of art without constantly listening to and judging the sound? 😉

I can’t do that very well. I have a standard that I’m always using to judge whatever I’m watching. Often, I’m pleased with the soundtrack, but just as often I’m not. The problem comes when I recognize some of the sounds in the film I’m watching because they’ve been dropped into the soundtrack straight from the sound library. It’s when people make no effort to customize library sounds or fail to add complexity to some familiar sound that I get frustrated. However, the best situation is when I’m engaged in the story to the point where I’m completely unaware of the sounds. That’s a good movie!

Again – as we all know this problem: If you were to pick one of Wolverine’s major super powers – which one would you choose and why? Strength, Healing or Claws?

I would choose healing. Let’s face it, it isn’t easy to create things out of nothing all the time and it takes a lot of energy to make normal sounds appear special. That’s the challenge we’re faced with every day in post-production sound. I love it, don’t get me wrong. I’m very glad I’ve been lucky enough to do what I do for so many years. But sometimes I would like to simply stand straight up and rejuvenate as my scars heal themselves and my eyes slide back into their sockets. Because I have some new claws I want to try out next.

Thank you very much for those insights Donald!