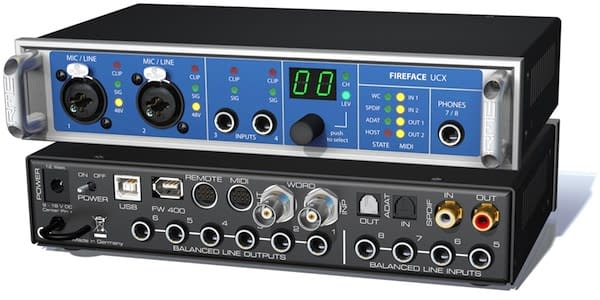 1. Briefly describe the product. What does it do?

The RME Fireface UCX is a USB/Firewire audio interface with sample rates up to 192 kHz.

2. To what extent has the RME Fireface UCX changed / improved your way of working?

I had an M-audio interface before with which I wasn’t quite satisfied. Now that ProTools is open for third-party products, I could finally swap. The drivers of the RME Fireface are extremely stable and react incredibly fast, especially when switching sample rates, which is very helpful for my working method.

A major benefit of this product is the fast driver which was a reason for me to swap. Additionally, I got rid of my analogue monitor controller which I had before, because the external remote control of the Fireface UFX, which is sold separately, incredibly simplifies my work and it just works far more precise. The mixer unit is very helpful as well, because you can use the remote control extremely flexible and even save complete mixer presets. For example: for de-noising works I turn on a compressor in my master channel with the remote, or whenever else I want to have a compressor in the output, without bouncing it to the file.

At the moment, it’s a disadvantage for me that I can’t easily plug in a second pair of monitors when using the analogue outputs. That means I will need an additional D/A converter to get some more channels. Currently, I am working with only one main 5.1 speaker setup, without being able to connect a B-monitoring section.

5. What is the Killer-Feature? What do you like in particular?

For me, it clearly is the overall quality of the product and especially the above mentioned drivers which have been the decisive reason for buying it.

6. Compared with similar products from other manufacturers. What is better / worse?

The Pro Fire 610 by M-Audio, that I used before led to several crashes or to audio driver freezes so it temporarily didn’t work at all, no matter which program I opened. Especially when ProTools was running and I tried using another application simultaneously with a different sample rate. Now, I don’t have that problem anymore. I can switch programs, be it from iTunes to Wavelab to Logic to ProTools – all of them opened simultaneously with different sample rates – everything plays without any problems.

7. The RME Fireface UCX is best suited for whom / which area of application?

For Edit Suites, Post-Pro and small studios, the product is excellent because of the flexibility it brings along. For larger applications it’s probably not suitable because it simply comes with too few outputs which of course are expandable, but definitely need to be expanded.

8. How is the price / performance ratio?

Generally, it’s not a cheap audio interface with regard to the number of channels or the in- and outputs the hardware gives you. But for me it’s definitely worth the investment because the features it offers are simply what I expect and what I hoped for qualitatively.

9. Your conclusion to the sound designers / BOOM blog readers out there?

Absolutely recommendable audio interface when it offers what you need. In case you need significantly more analogue outputs you would have to consider if the bigger version – the Fireface UFX – is the better version for you, or even consider other audio interfaces which might come with less outputs or functions. For me personally, it was exactly the right choice because I intercept much clearer and more distinct and can do faster A-B comparisons.

9 – to be honest, because of the relatively high price and the problem for me to not being able to connect a second full 5.1 set as B-monitoring.