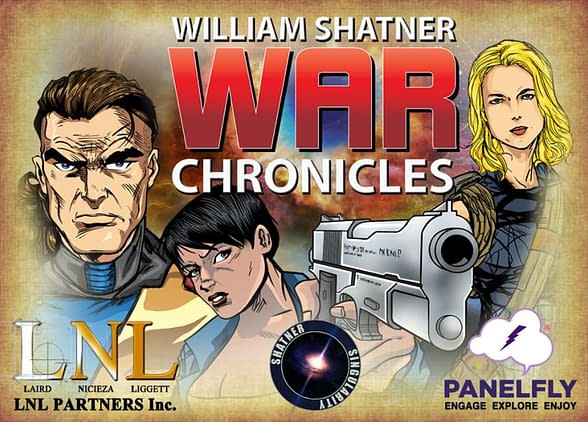 We are witnessing a new era of storytelling in comic books. Hollywood legend William Shatner presents his new War Chronicles – an innovative Cinematic Graphic Novels series including our BOOM sounds to create a unique piece of entertainment.

With the help of a world-class team, the icon himself, William Shatner took hold of the opportunity at this year´s Comic Con 2016 and announced the launch of his new Cinematic Graphic Series: William Shatner´s War Chronicles. (Available here on iTunes).

“I´m proud to usher in a new era of entertainment, working side-by side with talented industry veterans and newcomers all utilizing Shatner Singularity´s diverse platform of digital and print products.” – William Shatner

We all know traditional comics and cartoons. What Shatner, the Star Trek superstar, is creating right now is nothing short of a revolution: These Cinematic Graphic Novels blend the tried and true of comic books with the awesomeness of digital opportunities: while speech bubbles, comic panels and captions serve their traditional purpose, these digital comics include cinematic animations, original music and sound effects, making the stories feel even more alive, without taking away from the reading experience.

The group that is helping William Shatner turn this dream into a reality is LNL partners. LNL stands for Larid, Nicieza and Liggett, the names of the creative heads behind the group, all extremely accomplished in their respective fields of expertise: just take Liggett for example. As a musician he performed with Frank Sinatra, David Bowie and Van Morrison and won an Emmy for his compositional work. When LNL licensed Shatner’s sci-fi novel MAN O’ WAR and adapted it to their new format, the Cinematic Graphic Novel, they were faced with a new challenge: finding the right sounds. But, no surprise here, they got lucky ;-):

“BOOM’s sfx: Sci-Fi, Cinematic Hits, Assault Weapons, Close Combat were the primary effects used for our William Shatner’s War Chronicles Cinematic Graphic Novel. Thanks for the excellent products you are making! You are the best in the business!” – Scott Liggett (Executive Producer)

Obviously, this compliment blew us away and knowing that our BOOM libraries play a small part in this history in the making is really exciting for us.

The Comic Con 2016 was a complete success. Stan Lee, the creator of the legendary Marvel Universe and LNL Partners join this year´s panel discussion of Shatners Singularity universe. The panel introduced the new imprint´s digital comics, the Cinematic Graphic Novels and Stan Lee´s “God Woke” piece. “God Woke” is Lee´s original story of humanity’s quest for meaning and God´s own search for same, adapted by comics great Fabian Nicieza and a team of talented artists.

The series follows the course of a war for independence by the first generation of humans raised on the Red Planet. The story focuses on a controversial ambassador sent to negotiate peace between the workers at the Martian mining colony and the corporation that runs their lives. The flawed but charismatic Benton Hawkes confronts corrupt powerbrokers, political assassination, clandestine relationships and dangerous exploration and investigation on a depleted Earth and a powder-keg Mars.

“It is a joy to work with our great team of talented professionals and help bring to life amazing projects like William Shatner´s War Chronicles and Stan Lee´s “God Woke”.” – Scott Liggett (Executive Producer)

As you’d expect the novels are designed to be viewed on all digital platforms. You can read them and listen to the innovative sound effects and music on your smartphones, tablets, computers and other digital devices and enter into the future of a new era of comic books. The intention behind this new format is to create an experience that combines reading with watching.

To give you a first impression how that can feel – watch the William Shatner WAR CHRONICLES video here: