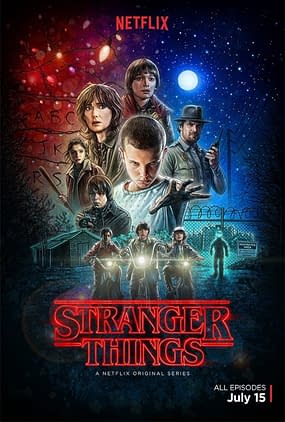 A cozy evening on the sofa with a new and interesting streaming series on Netflix – sounds like an awesome idea and the best thing is that you can also listen to our BOOM Library sounds in it!

The new series “Stranger Things” consists of an eight episode package and the story follows a group of four guys of nerdy middle school kids who lose one of their own in an alternative universe. The missing boy`s mum and his friends are in search of him and on their journey they find a strange girl – she seems to be the key to the enigmatic happenings in the city.

BUT WHAT ABOUT THE SOUND?

The sound on the show is done by supervising sound editor Brad North (300, Dr. House, Suits), sound designer Craig Henighan (Deadpool, Black Swan, The Secret Life Of Walter Mitty) and the team at Technicolor. They did a great job and created a mysterious, otherworldly sound and they have a bag full of clever sound effect tricks.
If you want to learn more about the Netflix series, the sound design process, the sound designer´s workflow and Brad North and Craig Henighan´s favorite scenes to add sound on – read the full interview from A Sound Effect with the two sound geniuses:

Click HERE if you want to read the interview.

To get a first impressions of the “Stranger Things” sound check out the trailer: